Head injuries involve any trauma that occurs to the scalp, skull, and brain.  These injuries are some of the most serious that any worker can suffer and some of the most difficult for doctors to treat. Even just a “bump on the head’ can lead to long-lasting damage if the injured employee doesn’t seek medical attention quickly enough.

Traumatic brain injuries (TBI) are typically classified as one of two types: Closed Head Injury: Any injury to the head which does not break the skull.

Open or Penetrating Head Injury: Any injury to the head which breaks the skull and either exposes or enters the brain.

The specific types of injuries that are most commonly diagnosed in workers’ compensation claims include:

A concussion occurs when the brain is injured due to a sudden impact. Loss of consciousness may or may not occur and the blood vessels in the brain may be stretched. It can take weeks, months, or even a few years for a concussion to heal.

A contusion is a bruise on the brain that is typically caused by an impact. If the contusion is large enough surgery may be needed to remove it before the bleeding causes more damage.

This type of injury is caused by a strong rotation and is often seen in car accident victims. There is typically an extensive tearing in the nerve tissue which disrupts how the brain communicates and the chemical processes of the brain. The damage can also cause functional impairments.

This type of injury occurs when the brain is deprived of oxygen.

Also known as Recurrent Traumatic Brain Injury, this happens when a second brain injury takes places before the clinical symptoms of a first brain injury have gone away. Depressed Skull Fracture: This means that the bone that has been broken moves in towards the brain.

Compound Skull Fracture: A compound skull fractures means that there is a scalp laceration as well as broken bone.

Symptoms That May Be Experienced

Doctors determine how severe a head and brain injury is by using the Glasgow Coma Scale (GCS). This breaks  injuries down into three groups: Mild, Moderate, and Severe.

Symptoms that may be experienced:

Severe TBI often has the most life-changing consequences for both the patient and their loved ones. Patients are frequently diagnosed with:

Can A Chemical Exposure Cause A Brain Injury?

Typically, when a client comes to us because of a traumatic brain injury on the job, it involves a physical accident which resulted in a blow to the head. But what many people don’t realize is that brain injuries can also be caused by chemical exposure. Chemicals Which Can Damage The Brain

A brain injury can be caused when an employee has been exposed to one of the following:

Many industries have to use metals like lead or mercury and although employees are supposed to be trained on how to use these materials appropriately, exposure still happens. When an employee comes into contact with a metal, it can result in damage to the cerebellum, basal ganglia, and the occipital lobe.

Did you know that carbon monoxide poisoning is the leading cause of accidental deaths in the U.S.? This odorless gas which is known as the silent killer can build-up when appliances like heaters aren’t working properly. Frequently, the early symptoms of exposure are confused with the flu but if someone is experiencing these symptoms and doesn’t seek help immediately, they may lose consciousness. Then, even if rescued, a lack of oxygen can cause damage to the brain.

Glues, nail polish removers, chemicals used during dry cleaning, paint thinners, and some ingredients used in detergents and perfumes are solvents. Exposure to a small amount of a solvent may cause dizziness, headaches, and confusion, however, a serious exposure might cause permanent memory loss and can even result in the loss of the sense of smell. 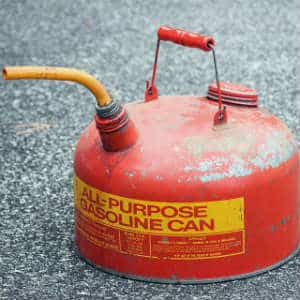 Although fuels are needed to power many types of equipment, working with or being around fuels can be dangerous. Inhaling fuel causes the chemicals to go directly to the brain where it can cause sleep disorders, depression, anxiety, and can even add to the loss of hearing. Researchers believe that this is because the brainstem is impacted by the exposure and the brain begins to have difficulty processing sound.

If a pesticide is inhaled or absorbed through the skin, it can impact an employee’s ability to breathe, see, move, speak and can even cause organ failure.

The Industries Most Impacted By Chemical Exposures

Although any employee could potentially be hurt by a chemical exposure, workers in the following industries are more at risk:

In order to create products that are safe, sometimes harsh chemicals must be used, especially in battery making, plastic creation, while making paints, and the creation of automobile parts.

Chemical plants and processing plants create tons of hazardous waste each month and if not properly contained and disposed of, exposure may happen.

Jet fuel is particularly toxic and anyone who works on airplanes could be exposed. Even just a tiny amount inhaled can impact the brain stem.

Construction workers are around all kinds of toxins – including metals, solvents, and fuels. Any of these could cause permanent damage to their brain.

There are strict guidelines set by OSHA regarding how chemicals should be handled and stored but containers and machines can have defects, and sometimes, employers care more about saving money than they do about providing their employees with a safe workplace.

Filing A Workers’ Comp Claim For A Brain Injury

Workers’ comp is supposed to keep injured workers from becoming financially strained due to medical bills for injuries or illnesses that they sustained while at work. However, claims that should be getting paid are denied every day by insurance companies that are trying to save money – especially in cases where a long-term exposure could have resulted in brain damage.

Proving that a chemical exposure resulted in brain damage can be difficult which is why it’s incredibly important to contact a workers’ compensation attorney as soon as you have received your diagnosis.

Not only can our law office help with the confusing paperwork, but we can also consult with medical experts, collect evidence, and go before the Workers’ Comp Board to fight for your rights. It doesn’t matter if this is the initial application or if the claim has already been denied – we can help you through the appeals process.

What Steps Do I Need To Take When Filing?

There are steps that should be taken immediately. This includes:

From here, the insurer will provide you with a written statement of your rights and if the initial application is accepted, payments should begin within 18 days of when the claim is received.

Are There Other Ways Of Obtaining Compensation? It is possible that there may be more than one way to obtain compensation. When a brain injury occurs, the damage may prevent the patient from living their life the way they did previously. This means they may no longer be able to enjoy activities they previously enjoyed and it could mean they are no longer able to work.

Although workers’ comp can pay for all medical expenses and a portion of lost wages, that is where the compensation ends. However, injured workers may have other options such as:

Most workers know that they pay into Social Security, however, not many people are aware that this program supports Americans who are unable to work – if they meet the strict requirements. In order to be able to collect SSD, an injured worker must have:

Sadly, even though millions of Americans depend on the payments provided by this program, it’s even more difficult to obtain these benefits than it is to get workers’ comp and the waitlist for appeals is almost two years.

In many cases, a third party was negligent and it was this negligence which resulted in chemical exposure.

For example, if a manufacturer creates a container which is supposed to hold a pesticide but due to a defect, it leaks and an employee is exposed and then diagnosed with a brain injury, the manufacturer could be held legally responsible for the harm that was caused. Personal injury lawsuits can provide a plaintiff with full compensation for past and future medical expenses, lost wages, physical pain and suffering and even emotional distress.

Why Should I Choose The Disability Guys?

Our firm was founded in 1933 and we have been at the forefront of workers’ compensation and disability claims since that time. Each of our experienced attorneys has dedicated their career to making sure that injured workers get what they need and deserve. We make sure that our clients feel supported throughout the entire legal process and we believe excellent communication is the key to a good client-attorney relationship. Contact us today to learn more.

The Cost Of Living With A TBI

According to the National Center for Biotechnology, head and brain injuries are the leading cause of long-term disability, with 52% of survivors moderately to severely disabled on the 1-year anniversary of their injury.

The cost of care for even just a mild TBI is around $35,954. The cost goes up as the severity of the injury worsens, making the average cost of a severe TBI around $3,837,578. That is a financial burden that the majority of hardworking Americans are unable to bear.