In the U.S. the restaurant industry makes an average of $785 billion a year and the reason why is simple – Americans love to eat out. In fact, the average New Yorker gets their dinner at a restaurant at least once a week. Thousands of websites, apps, and blogs are dedicated to reviewing food, drinks, ambiance, and service but what isn’t frequently addressed are the numerous dangers that exist and often harm both visitors and workers.

The “Front” and “Back” Of The House

In most food industry businesses, there is the “front” of the house where employees interact with customers and serve food and drinks. There is also the “back” of the house, which is typically where the kitchen staff are busy preparing orders. In both locations, hazards regularly occur which have the potential to cause serious injury.

Some of the most common ways in which restaurant employees become injured include: The majority of these accidents and the subsequent injuries are, sadly, preventable. Under premises liability law, the owners and managers of a property are required to do what is reasonable to ensure their property is free from hazards or that hazards are easily identifiable and avoided if the needed correction will take time. Unfortunately, hazards that should have been discovered quickly and remedied are often missed.

It’s not just restaurant employees who can be injured on the job. In order for a business to run efficiently, delivery personnel and various service technicians typically set foot on a property to make sure that the necessary supplies are available and that machinery is working properly.

Recently, one man, a soda machine technician, was seriously injured while working. As usual, he had arrived and set up his tools to begin repairs. During the course of his work, he turned to reach for a tool and his foot hit a greasy spot on the hard tile floor. Unable to maintain his balance, he fell, landing on his left shoulder.

Initially, he thought the pain he was experiencing was just normal bruising and discomfort from the fall so he continued to work and didn’t report the incident. However, by the next morning, he was in so much pain that he went to the emergency room. There, doctors diagnosed him with a rotator cuff injury.

He followed his doctor’s advice and a repair surgery was performed about a month later, which was not entirely successful, resulting in the need for a second surgery a year later.

Due to the injury and the scar tissue from multiple surgeries, he has suffered a limited range of motion and has chronic pain. He is unable to return to his previous position and although he attempted to learn a new set of computer skills, he has been unable to find regular work since his accident.

He pursued legal action against the restaurant, claiming that they were negligent because they failed to find the grease spot within a reasonable amount of time and clean it up. The case went to trial and he was awarded $2 million, which was reduced to around $1.4 million because the jury determined he was 30% at fault for the accident.

Although the plaintiff in this case likely filed for workers’ compensation to cover his medical bills, his employer wasn’t the restaurant. This means that he was eligible to pursue a slip and fall lawsuit to obtain compensation for losses that workers’ comp wouldn’t cover – namely the full amount of lost wages due to his inability to return to work.

If the worker who had been injured worked for the restaurant, they would have to pursue a workers’ compensation claim. Although this system was created to protect workers and ensure that they are kept financially safe, it frequently fails to do so.

Workers’ compensation claims, if approved by the insurance company, should provide the injured employee with coverage of their medical expenses and a fraction of lost wages for the time they are unable to return to work. The problem is that a large percentage of these claims are denied. When that happens, workers have limited options because workers’ comp prevents the employee from suing their employer for compensation.

Why Are Claims Denied?

There is a long list of specific reasons as to why claims are denied but the majority of all denials stem from two main issues:

When this happens, an appeal can be made but these appeals usually take months to resolve.

How Can I Avoid A Workers’ Comp Denial?

Working with a lawyer from the very beginning is the best way to ensure the first application submission results in a quick payment.

It’s not uncommon for an employee to hesitate to contact an attorney because they don’t realize how an attorney can assist them, other than filing a lawsuit. But our team can help even if you don’t pursue a civil complaint.

Together, we will work with you to fill out all claim forms, avoiding the common mistakes the might result in a denial. We will also speak with the insurance company on your behalf and review the case to determine if you are eligible to file a personal injury lawsuit. Just because you can’t file a lawsuit against your employer doesn’t mean that another party isn’t also responsible.

What If I’ve Already Received A Denial? First, it may be possible depending on the preliminary information, that a hearing will be held before a judge who will review the evidence and determine if they believe the claim should be paid. If the judge denies the claim, there are still options and another appeal can be pursued.

Appeals must be filed within 30 days of the denial and must include a written request to the New York State Workers’ Compensation Board, requesting them to review the decision. A panel of three board members will then go over the claim and either affirm, change, or rescind the judge’s decision. If the board also chooses to deny the claim, an appeal can be made to the Appellate Division.

How Much Can I Get From A Claim?

The amount of money obtained from workers’ compensation directly relates to the actual losses sustained. So, all medical expenses for treatments needed for the on the job injury are coverable with a few exceptions. In addition to this, a small fraction of lost wages are also an available benefit.

If the injured worker is also able to file a personal injury lawsuit, the amount awarded in compensation may also include full coverage of lost wages, physical scarring and disfigurement, and even emotional trauma. But again, the amount given to each plaintiff differs from case to case, depending on the circumstances and their specific losses. 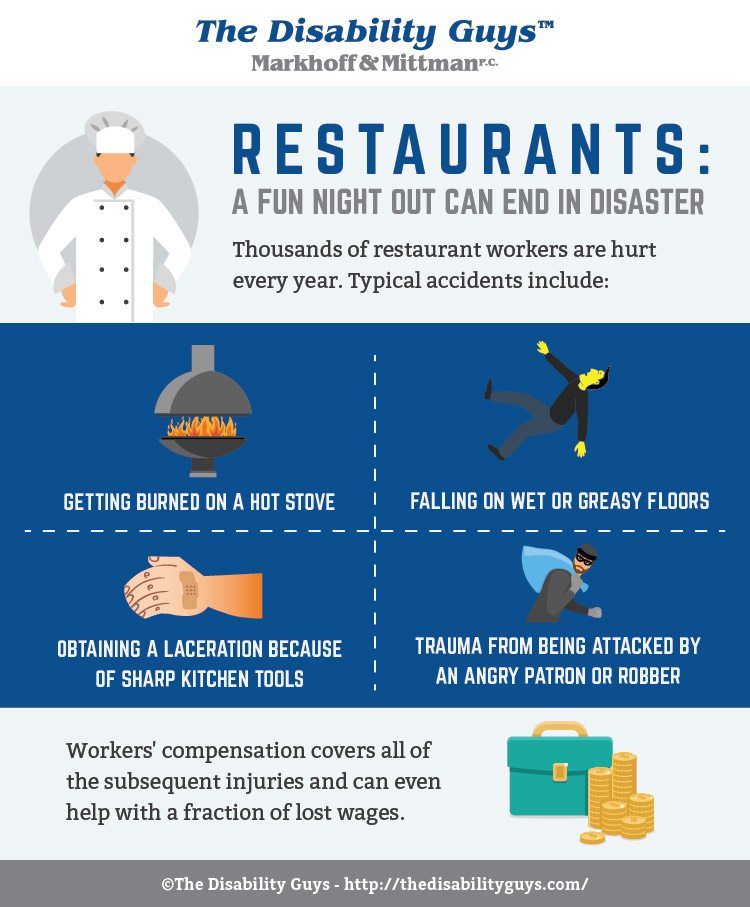 Please include attribution to TheDisabilityGuys.com with this graphic.